Selling any product from the catalog Kaefer / Käfer at low prices

Selling any product from the catalog Kaefer / Käfer at low prices

The site contains only a small part of the catalog items Kaefer / Käfer.

The German company Käfer Messuhrenfabrik GmbH & Co was founded in 1932 by a mechanic named Johannes Käfer as a mechanical workshop producing dial indicators. Today the company is the largest independent manufacturer of dial gauges and calibration devices in Europe. In 1936 the company moved to new premises due to the expansion of production. In 1980, the company once again significantly expanded its office and production space by constructing a new two-story building. In 1994, Käfer Messuhrenfabrik acquired the arrow indicator manufacturer E. Messner VS-Schwenningen. In 1998 the company received the DIN EN ISO 9001: 1994 certificate. In 2003 the certificate was renewed to the DIN EN ISO 9001: 2000 standard. Since 2005, the subsidiary company Käfer Dial Gauges (Shanghai) Co. Ltd. has engaged in the release of separate standard calibration kits, including for the Asian market, which differ from the main models of the company in more economical prices. In 2010 the company received the DIN EN ISO 9001: 2008 standard. Today the company's head office is located in Villingen-Schwenningen in Germany and has over a hundred employees. In addition to product release, Käfer Messuhrenfabrik also repairs and calibrates its dial indicators. 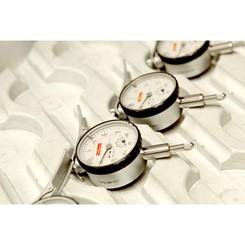 Precision analog dial indicators offered by the company are characterized by well thought-out design and increased durability. Digital precision indicators feature a large display with large digits and a rotatable display section. Indicators are calibrated according to international or national standards. 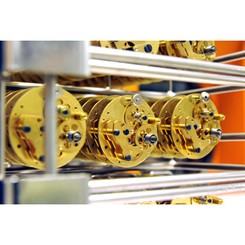 Dial-type lever indicators are designed for measuring linear dimensions, as well as for detecting deviations from a given geometric shape. Precision micrometers with digital and analog indicators are designed for high-precision measurement of the thickness of flat materials (paper, foil, film, etc.) both in laboratory and in production conditions. High-precision thickness gauges with analog dial indicator or digital display allow precise thickness measurements of flat film or sheet materials. In addition to these products, the company also offers accessories for mounting indicators, various spare parts and accessories, as well as calibration services for sensors and control devices.

The cities of our deliveries Kaefer / Käfer