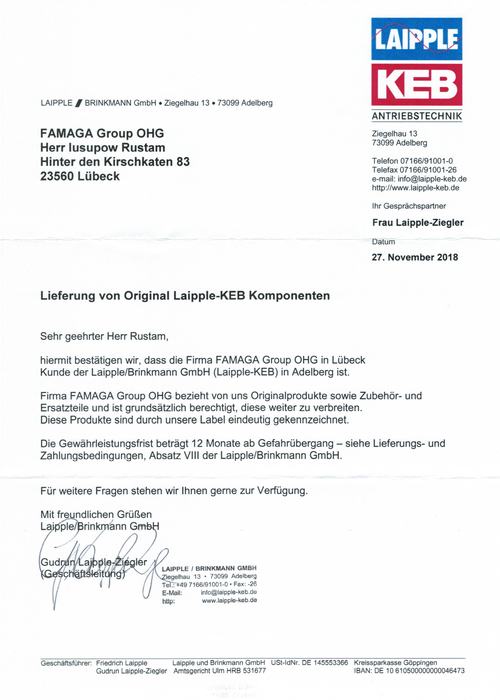 All certifications
FAMAGA always strives to provide the best prices and timings of supplies for its customers. We sell only original equipment and spare parts, although we are not always the official distributor or manufacturer's dealer. All displayed trademarks and part numbers are the property of their respective owners.
Our catalog contains the entire product line of the LAIPPLE KEB / BRINKMANN manufacturer at good prices with door-to-door delivery to any region of United States, including your area: Ashburn. Our managers will help you to select and buy suitable LAIPPLE KEB / BRINKMANN product or spare part, just right after sending an application form. To find out the prices and delivery time, please fill in the feedback form or send your inquiry to

Since 1973, the German company Laipple Keb has entered the field of automation and control systems, directing its production power to the production of gearboxes, servo drives, controllers, electric motors, software, control systems and other components. Today it occupies high positions in the global industrial arena and has offices in many countries, including Russia.

KEB products represent the leading German individual and standard solutions for automation and control systems, as well as spare parts and accessories for them.

Devices in a waterproof housing are available in several series for different power motors and combination with controllers and interfaces Modbus, Profibus, Ethernet and others. Universal modular Combivert F5 for compressors, pumps and positioning systems are equipped with an overload function, connection of feedback sensors, up to 900 kW.

To control frequency converters, there is a universal software KEB Combivis 5.6 with a configuration of a specialized CP menu.

Keb manufactures helical gearboxes up to 45 kW and maximum torque up to 13000 Nm (G), helical helical (ZG), shaft-mounted (F), bevel helical in 2 and 3-stage versions with power up to 45 kW (K) and worm-cylindrical low-power with a different range of ratios (S). Gearboxes are equipped with docking flanges for synchronous / asynchronous motors and have independent ventilation.

The combined servo gearmotors have a rated torque of up to 90 Nm, independent ventilation and an electromagnetic brake. In this case, the gearbox can be made in a worm, conical or cylindrical version.

Laipple Keb electric motors are frequency-controlled models of low-voltage asynchronous motors for operation on the mains or under the control of drives and synchronous motors with a nominal torque of up to 70 Nm.

Combicontrol programmable controller is programmable and connected directly to frequency converters. With its help, complicated movement patterns are carried out. It is combined with ESA panels and controlled from a remote control panel. Real-time data transmission is possible thanks to EtherCAT and CAN interfaces.

The video above was taken from LAIPPLE KEB / BRINKMANN official website/Youtube channel. 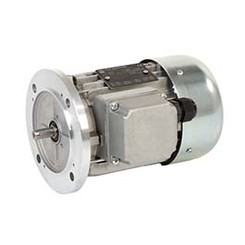 Laipple KEB offers a wide range of asynchronous motors. Motors from 0.04 to 315 kW, with 2, 4, 6 or 8 pole windings, AC powered, with integrated safety brake, integrated incremental or absolute encoder, various types of special output shafts. The product line includes high performance motors in a square enclosed housing and compact design for use in clean rooms, the medical and food industries. 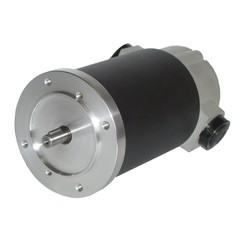 There are several series of DC motors in the company's catalog. The EC series is equipped with permanent magnets and features a high starting torque with a constant torque-to-speed ratio. The line contains 9 standard sizes with power from 30 to 800 W at 3000 rpm. The supply voltage of the motors is 12 or 24 volts. The ND series with neodymium magnets contains motors in two sizes, from 120 to 250 watts at 3000 rpm and 12 or 24 volts. The PLN series inverters offer current limiting, acceleration and deceleration times with a 28-turn potentiometer, LED system diagnostics and display, metal housing, for dynamic applications. 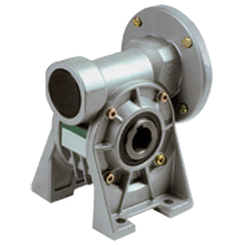 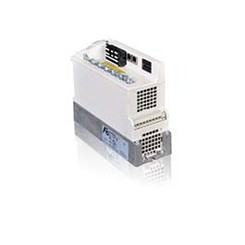 Among the company's products are frequency converters of various types, starting with a series of IP68 converters for direct mounting on a three-phase motor. The units are available for motor powers of 0.37, 0.75 and 1.5 kW at 230 V and 1.5 kW at 400 V. The converter housings filled with a special polymer protect them from moisture, dust, damage and vibration. The F5 series of frequency converters is divided into subtypes: F5-B (Basic) for controlled applications with a rated power from 0.37 to 15 kW; F5-C (Compact) series with improved software and power up to 90 kW; F5-M (Multi) for applications up to 900 kW. B6 series converters are a new class of turnkey solutions available for analog or digital control, with the option of onboard CAN bus, power range from 0.37 to 2.2 kW at 230 VAC and from 0.75 to 4 kW at 400 VAC. High-performance devices of the G6 series meet DIN ISO 13849-1, PLe and IEC62061 SIL3, have low leakage currents, RS232 / 485 interfaces for quick programming and commissioning, power range from 0.75 to 1.5 kW at 230 VAC and 0.75 to 30 kW at 400 VAC. Frequency converters of the F6-K series are available in 7 frame sizes and a power range from 1.5 to 900 kW in voltage classes 230, 400 and 690 VAC. All inverters, due to their modular design, allow the controllers to be equipped with Profibus, CAN, Sercos, DeviceNet, Modbus or Ethernet interfaces at the choice of the end user. 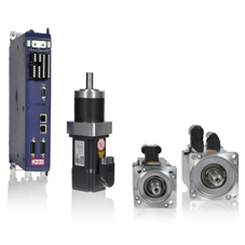 The company produces a wide range of servos and controllers for them. The S6 controller series is designed for controlling drives up to 5.5 kW, equipped with an integrated EtherCAT and CAN interface for real-time data transmission. This series of controllers is used in packaging lines, food industry, machine tools, spindles, elevators, woodworking industries. F5 series controllers are designed to control drives based on synchronous and asynchronous electric motors up to 900 kW, have a modular system and provide connection of a sensor system. F5-A controllers integrate with servo drives and are optimized for single axis control in a small power range of up to 1.5 kW. The H6 product line implements a modular drive system for synchronous and asynchronous electric motors with a power of up to 160 kW, the devices are equipped with a real-time communication module EtherCAT or a gateway for Profibus, CAN, etc. The C6 line of PLC-based controllers, which contains devices from the basic controller to displays and routers, allows you to implement a controlled system of any complexity with the combination of devices via EtherCAT or Profibus, CAN, Interbus. Laipple KEB also manufactures synchronous servomotors for applications with the highest quality and positioning accuracy requirements in a minimum size and lightweight. 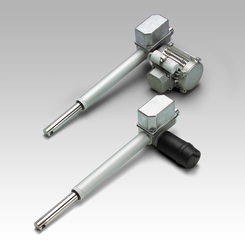 The company's product catalog also contains several different series of linear electromechanical actuators. The ATL range of actuators is available in 15 sizes, provides linear travel speeds from 1.4 to 150 mm / s, maximum loads from 600 N to 350 kN, strokes up to 800 mm, and is equipped with an AC or DC motor. The BSA actuator series is available in 14 sizes, has a linear stroke speed of 2.4 - 93 mm / s, and a maximum load from 410 N to 123 kN. The CLA and CLB actuator series can be operated with 3 built-in limit switches or 2 built-in limit switches with potentiometers for position feedback. The LM series of compact linear actuators with built-in limit switches is available in 3 sizes, has linear speeds up to 52 mm / s, loads up to 1300 N, standard strokes up to 300 mm and is equipped with 12, 24 or 36 V DC motors. 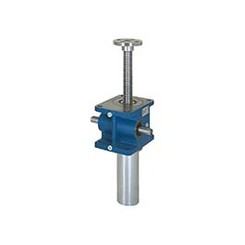 We deliver equipment of LAIPPLE KEB / BRINKMANN
throughout the world

We deliver equipment of LAIPPLE KEB / BRINKMANN
throughout the world 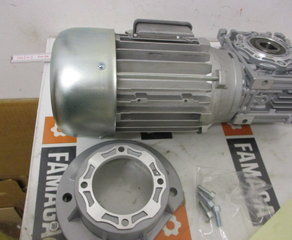 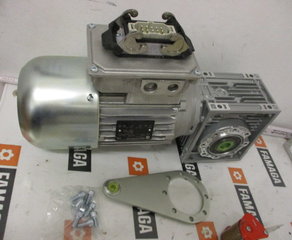 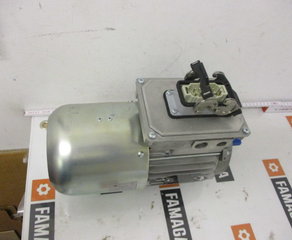 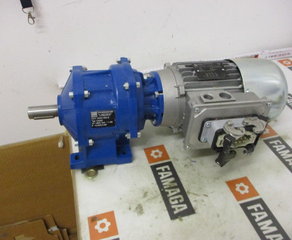 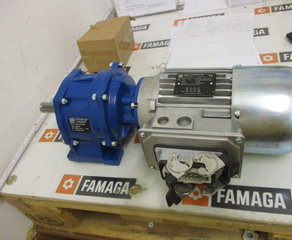 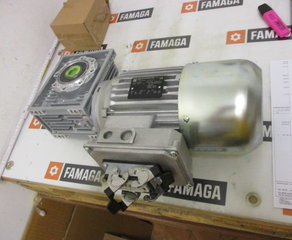 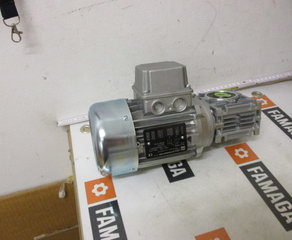 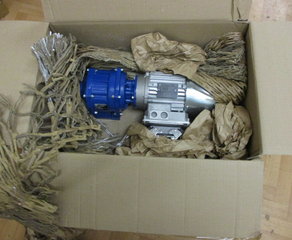 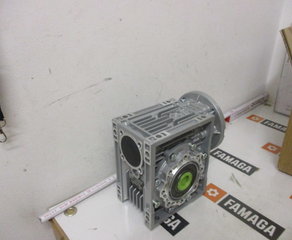